5 Forces Acting Upon Your Business Model

Written by Alexander Osterwalder on December 14, 2005 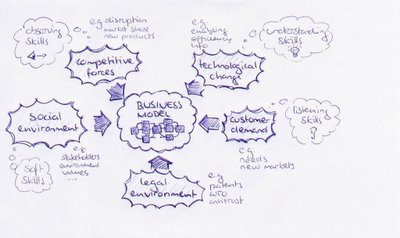 The business model of your company is subject to continuous change and influence from external pressures. As a knowledge worker and business designer, it is your role to constantly reflect on how to adapt your company’s business model to this changing business environment.

In this post, I discuss some of the major pressures that directly or indirectly influence your business model and illustrate them through simple examples.

I mainly look at 5 pressures coming from technological change, competitive forces, changes in customer demand, and changes in the social or legal environment.

While this might seem obvious, very few companies constantly scan their competitive environment for these 5 forces acting upon their business model.

Understanding the transformational potential of technology for your company’s business model is not an option anymore. It is a must.

This does not mean you should be driven by technology, but it does mean that you should be on the lookout for how it can reinforce or transform your business model.

Retailing has been transformed by the web: Established retailers such as Walmart and Tesco are now among the most successful internet companies, because they added a new distribution channel to their traditional business model.

The music industry is among the most-cited for being turned upside-down by the digitalization of sounds and images, because its players are incapable of finding new sustainable internet-era business models.

A second major pressure on a company's business model comes from its competitors. Competitors may be well known and established adversaries or new and unknown parties disrupting entire markets.

Increasingly, competitors also emerge from completely different fields to compete in an established market with a very new business model.

In the field of voice telecommunications, new kids on the block like Skype are rapidly disrupting the market by offering free or cheap voice chat over the internet based on an entirely different business model.

But most interestingly, sometimes competitors emerge from two very different industries to compete head to head with different business models.

This happened when Telcos and Cable TV operators both started offering so-called quadruple plays to the same segment of customers: TV, Internet access, fixed-line telephony, and mobile telephony all in one.

Pressure to adapt a company's business model may obviously also come from the customer demand side. Changes in consumption patterns, revenue increases and "fashion changes" are just some of the possibilities I would like to mention.

The shift from fixed-line to mobile telephony might be seen as technological change, but it is a nice example of how this relates to changes in customer demand. The fashion industry is a domain which is constantly submitted to changes in customer demand. Companies like Zara have been extremely successful by designing a business model around detecting customer fashion tastes and immediately adapting their offer to that.

Sometimes the social environment and social mood can influence the business model of a firm. This kind of pressure is particularly studied in stakeholder theory.

For instance, if a company's business model is centered around low cost production in developing countries, it might draw the attention of militant non-governmental organizations (NGOs) that could mobilize public opinion against the firm.

Ultimately, the social environment always has an indirect influence on customer demand, be this by shaping people’s values, their everyday behavior, or their attitude regarding technology adoption.

Nike was subject to activist accusations regarding the ethics of its operations in Vietnam. Subsequently, NGOs put a lot of energy in mobilizing consumer boycotts against Nike.

A completely different example of the social environment is the position of the elderly in a society. Traditionally, families have looked after the oldest members of a family. This is still the case in many parts of the developing world, but has changed a while ago in western societies.

Demographics in general should be monitored when thinking of the future of one’s business model. Don’t forget that in Japan and large parts of Europe, retirees are already one of the most interesting market segments.

Often, changes in the legal environment also make it necessary to adapt your business model. These changes may sometimes come from unexpected places such as consumer or environmental taxes or patent laws.

Taxes on gas or SUVs may shift consumer demand to new and innovative vehicles, such as hybrids or even solar energy cars. This may even lead to an increase in the use of the public transportation system.

The introduction of new privacy laws can make some business models that extensively rely on customer information without the customer's explicit accordance illegal. Anti-spamming laws may (hopefully) wipe-out business models based on sending out large trunks of unsolicited mails. Regulating advertisement over mobile phones may limit the range of possible business models in m-commerce.

While these 5 forces may seem obvious, there are still relatively little tools to constantly scan and map a company’s environment. Simply maintaining a list with the five categories outlined above is a simple, but useful start.